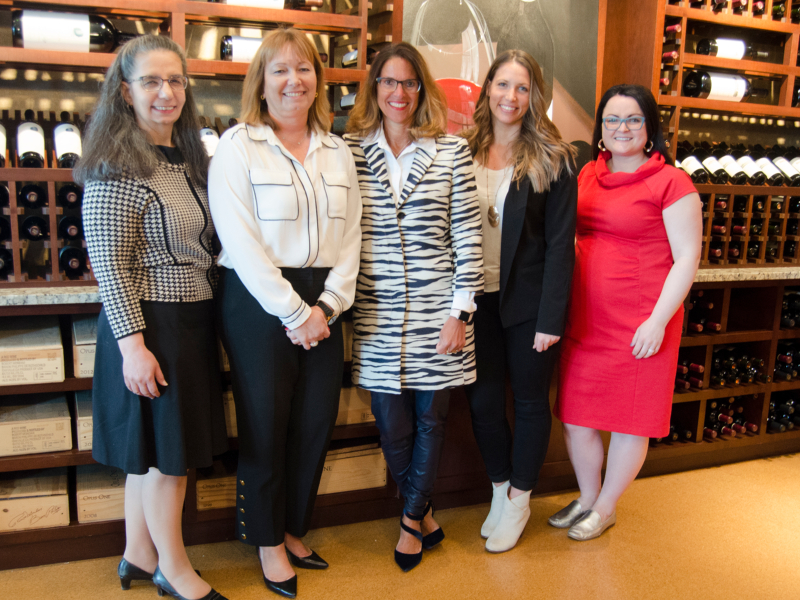 Things you don’t see too often: A solar eclipse, a winning lottery ticket, an all-female leadership team. At Constellation Brands-Marvin Sands Performing Arts Center, or CMAC, you are guaranteed to find the latter.

Clark was initially tasked by Richard Sands to renovate the crestfallen former Finger Lakes Performing Arts Center in 2005. After a successful renovation that opened on time and under budget, CMAC was off and running. Led by an outside group, the venue fell into a million-dollar deficit in the first two years. That is when Sands appointed Clark president and executive director of the amphitheater.

“I knew nothing about the music business,” says Clark. “I decided that I needed some help, so I asked Richard and Rob (Sands) if we could utilize some people here at Constellation to help our business model. That’s when I went to my colleague, Sandy Dominach. She was in the finance area, and I knew she could help us develop the business plan. I knew I also needed an attorney as we formed partnerships and agreements and contracts, so I asked Barb Laverdi to join the team, and she agreed to support us.”

Frieda joined Constellation in 2011 as an intern and was hired almost two years later as hospitality and community affairs specialist. A couple years ago Clark began mentoring Frieda and showing her the ropes of the executive director role, which she officially passed on to Frieda in June 2017.

Similar to Clark, Dominach, Laverdi and Frieda do not have prior experience in the music business. Thrown into this business, the women relied on each other as they learned the ins and outs of the industry.

“It’s really a ‘learn as you go’ type of industry,” says Frieda. “Most people that have been in the industry are the ones who created it back in the 60s and 70s when touring began. Now there are people who go to music business classes in college and things like that, however, a lot of people who are on the road today don’t have a degree in it, they just learned as they went.”

Having a leadership team of all women was not a conscientious decision, says Clark. Her previous experiences working with the women she brought on to her team influenced her decision to bring them on board. It was merely coincidental that they all happened to be women.

“I had worked with these women on other Constellation projects, so we formed a trust and a respect first as colleagues at Constellation,” says Clark. “I tell people I have three rules if we’re on a team whether it’s internal or external, and they are trust, respect and communication. I think we as female leaders need to realize that if you have trust, respect and communication then it doesn’t matter who’s sitting at the table. But if you don’t have that and egos are playing out or titles are playing out, then it doesn’t work. My colleagues here share the same belief. They just want to do their job.”

Dominach adds that being a nonprofit organization, “nobody is trying to beat someone else to become the head honcho.” The women are all focused on the same exact goal: Making CMAC a superior music venue for all guests, patrons, artists and employees.

“As a team, we understand each other,” says Dominach. “We have those instincts focusing on hospitality and the experience. I don’t want to be stereotypical, but women tend to bring out the soft skills more than men. Everyone has them, but women bring them out more.”

Hospitality is a trait that all of the women on the CMAC leadership team value greatly when it comes to running the amphitheater. Clark went to school for hospitality and service management, and she completed her bachelor’s in 2006 at Rochester Institute of Technology just as she was stepping into the leading role at CMAC. Clark went on to earn her master’s from RIT in 2008 in service leadership and innovation. She used CMAC as her thesis for her capstone project on how to build a strong business model.

Clark’s vision for CMAC was clear. When it came to running the venue, she thought, “‘if I just keep service and hospitality at the forefront, the music will come.’ My vision was that even if a customer came and didn’t love the performance, they still loved the venue,” she says. “I want people to come because they feel safe, because we know how to take care of traffic, we know how to have good food that isn’t overpriced and we create a feel-good atmosphere. I think today that’s one of reasons CMAC is successful; we never changed from what we said our vision was going to be.”

When people envision women working together in the office, there is often an assumed air of cattiness that accompanies an estrogen-heavy environment. However, this group of women leaves drama at the door. They operate by leaning on one another’s strengths and focusing their energy on building a trustworthy atmosphere.

“The rule I had with my daughter when she was a little girl was this: No whining, no crying and hold my hand,” says Clark. “Now I say it here; just hold my hand. Walk side by side with me as we go through this project. No whining, let’s not get dramatic or chaotic. Let’s calmly hold hands, and we’ll get through this.”

Laverdi uses a music analogy to explain CMAC’s leadership team. Clark leads the band while all of the other women play our part, whether it is harmony or melody, to produce a successful product.

“At the risk of appearing to continue stereotypes, I believe that an all-female leadership team brings a greater emphasis on a collaborative approach than is often the case with a mixed gender team, as well as a clear recognition and understanding that the group, as a whole, is stronger than its individual parts,” says Laverdi.

Assistant treasurer Stephanie Gorman says that she and the other leaders of CMAC take things to heart when things go right, and especially when things go wrong.

“I think of CMAC as my baby; I want to see it grow and thrive and I would take it personal if it didn’t,” says Gorman.

Gorman adds that the CMAC’s leadership is a team of go-getters. Clark, for instance, is also president of the board for New York Wine and Culinary Center, which was recently rebranded as New York Kitchen, as well as senior vice president for public affairs, where she is responsible for overseeing federal government and community relations for Constellation Brands Inc.

“Women get things done,” says Gorman. “We are passionate and intense, but we bring our nurturing side to the table as well. Most of us have demanding personal and professional lives, and we manage to juggle it all by staying on top of everything all of the time.”

CMAC is more than the leadership team of women. The women look to their board of directors for guidance, and more than half of the board consists of men. Furthermore, as a nonprofit, Dominach notes that CMAC relies on the expertise from various employees, male and female, within Constellation Brands.

But at the core of CMAC are these women leaders who have led CMAC out of the darkness of debt and into the light of success. In fact, since Clark and her team took over 12 years ago, CMAC has not lost a penny.

“I think it’s very unique in this community that we have such an empowered group of female leaders that are bringing up a venue and community asset,” says Frieda. “I grew up a mile down the road from the venue—Ginny did too, which is a funny coincidence—and there are so many of us who have that story. I think it’s great that we’ve had this opportunity to bring the venue to life and keep enhancing the experience and building relationships and partnerships within the community and the industry.”